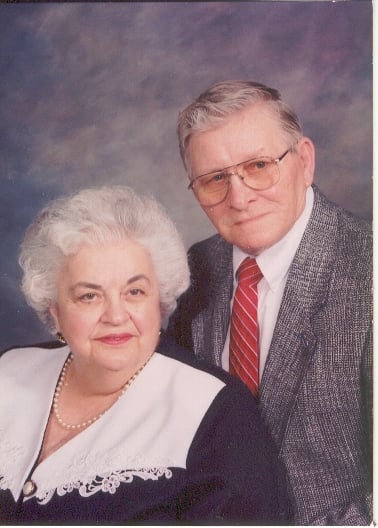 She was born December 19, 1924 in Bellaire, Ohio a daughter of the late Pasquale and Maria Cardillo Shirretta.

She was a seamstress for the former Bellaire Garment Factory where she served as Union President of the ILGWU and a member of the Neffs United Methodist Church and the Sons of Italy Lodge 754.

In addition to her parents, she was preceded in death by her husband, James R. Wallace on January 20, 2000, they were married at the Coalbrook Presbyterian Church on July 25, 1945, one brother, Phillip Shirretta, six sisters, Lucy Tedeschi, Angela Patrone, Ann Patrone, Rose Magistro, Jenny Sparachane, Katherine Ballog, three infant siblings and her daughter-in-law, Tish Wallace.

Family and friends will be received at the Bauknecht-Altmeyer Funeral homes & Crematory 441 37th Street Bellaire, Ohio on Sunday from 6 to 8 pm and Monday from 2 to 4 and 6 to 8 pm where services will be held on Tuesday at 11 am with Pastor Larry Helms and Kathy Wallace officiating.

Interment in the Rock Hill Cemetery in Bellaire, Ohio.

Memorial contributions may be made to the Neffs United Methodist Church by going to “TMCFunding.com”.

Share your thoughts and memories with Mary’s family at www.bauknechtaltmeyer. com.

My sweet Mary… I just did a random search hoping not to see this. I hadn’t heard from her which was out of the ordinary. Mary was a bright light of love, warmth, and laughter. I used to instruct water aerobics and she would be one of the first ladies there. She would tell me stories and I would be in tears laughing. On my last day at work, she took my hands and sang a beautiful song to me. It made me cry. We kept in touch as I moved across the states and she would always share another story with me, a the while, keeping her incredible sense of humor. I know she missed a lot of people and she is most likely very happy to see them all again… however, this world lost some shimmer the day Mary left us. Oh, how I will miss her letters. xoxoxoxoxo To any family members reading this… She was special. May God Bless you.

To the Wallace Family,

So sorry to learn about Mrs. Wallace.

Please know that your family are in our thoughts and prayers during this very difficult time.

Bob and family,
Judy and I are so sorry to have just learned of your loss. You are in our thoughts and prayers. We appreciated it when you came to my Dad’s funeral home and you have always been a good friend of the family. We know words cannot replace her, but be assured that many people care about you in your time of need. She obviously was a very special person and leaves a fine family as her legacy.
Brent and Judy Stobbs

To all of Mary’s family,
We are sorry to hear of Mary’s death and can imagine the pain and loss you are feeling. From the times that I talked with Mary, I know that she was a smart lady who loved her family very much and lived her faith. May God bless.

To the Wallace Family – so very sorry for the loss you are now feeling. May you find comfort in God at this time.

Tina and John Hughes and Dot and Leslie Tedeschi

Dear Terry, Bob and Mike — We are saddened to hear of Aunt Mary’s passing. We have such fond memories of her and will miss her ornery e-mails. We are sending loving thoughts and prayers to all of you. Peace be with Aunt Mary and all of you.

Terry, Bob and Mike,My thoughts and prayers to each of you and your families. I have many fond memories of both your parents when you lived at Merrits Row. I was going through a box of letters and found several that Mike had written Ron when he was in the Air Force.They were all about Terry and his football days. Brought an instant smile to my face.Carry on guys you had great role models. Sandy

Never really knew Flo very well until my sister Tish got sick she would come to the house and sit next to her bed with Tish every day. My sister loved her like a mother and Tish would talk about her all the time. She was a special lady glad I got to have known her. Prayers for her family

So sorry for your loss, prayers to the whole family

Will miss you Mary and all of the ladies of Merrits Row that called this place home. May you rest in peace while you are reunited with so many people that loved you.