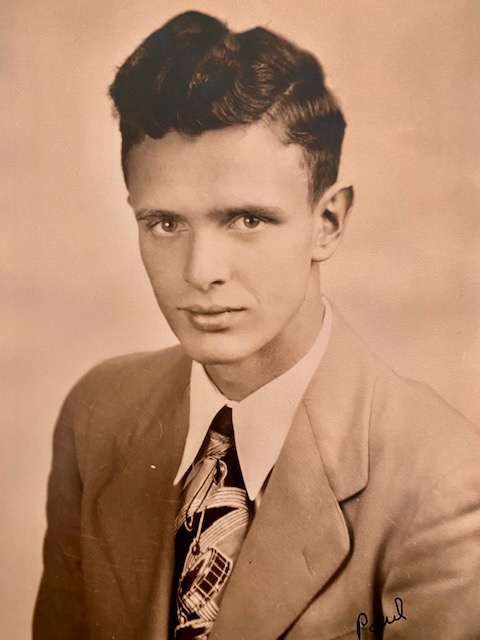 Paul Edward Ramsay, formally of Shadyside, OH –
Paul Ramsay, 90, passed peacefully in his sleep on Tues, May 3, 2022 at a health care facility in Crown Point, IN following a long period of declining health. Paul was born June 2, 1931 to Forest and Ruth Ramsay in Key, Ohio.
Growing up a county farm boy, life was mostly having fun. Paul was the youngest of 6 and spent his summers helping with farm chores. He graduated from Bellaire High School in 1949 and began learning the skills of a carpenter and cabinet maker. On a blind date, he met and later married the love of his life, Sally Morgan. Upon first sight, Paul proclaimed,” I’m going to marry that girl!” and so he did. After a tour of active duty in the Air Force where Paul was stationed in South Korea, Paul and Sally settled in Shadyside, OH where they raised their family and lived the majority of their married life until Aug of 2018. With declining health issues, they moved to Crown Point, IN to be near son Jeff and family.
Paul was a skilled woodworker and craftsman. After discharge from the Air Force, he worked at Scott Lumber, and then Boury, Inc, where he was in charge of the woodworking shop, becoming a master carpenter and cabinet maker. He then began working with Forrest City Dillon in the late ‘70’s, a large prefabricating builder of parking garages and apartment buildings, as a construction supervisor, travel for several years in the mid- Atlantic and North Eastern states. His final job before retiring was as a State of Ohio building inspector where he covered a 5 county wide area. In every area, Paul’s keen eye and astute building skills, sense of humor and easy going manner served him well and he was highly regarded by all who knew him. It always gave him a chuckle to be told of his likeness to Merle Haggard – as a young man but also as a whiskered old guy. He could have been Merle’s stunt double except for the singing.
Paul was a 60+ year member of the local Union 3 in Wheeling, WV, United Brotherhood of Carpenters and Joiners of America and The American Legion Post #521 in Shadyside, OH. His legacy of fine craftsmanship lives on in the many buildings, pieces of furniture and jewelry he made in later years and the lovingly recreated doll house of his and Sally’s home in Shadyside given to his granddaughters when they were young. Grandson Christopher inherited his grandfather’s love of wood working and so Paul’s talent carries on.
Paul was predeceased by his parents, his older siblings Lenora Baker, Emmeretta Mc Donough, Helen Pollock, Mildred Evans, and Willard Ramsay, his beloved wife of 68 years, Sally Morgan Ramsay, youngest son Tommy Ramsay, and son-in-law Rick Moore. Paul will be deeply missed by oldest son Jeff and wife Maryann Ramsay of Crown Point, IN, daughter Barb Moore Austin and husband Jimmy of Dover-Foxcroft, ME and daughter Becky and husband Ed Lheureau of Brownsburg, IN. Grampa Paul was much loved and will be sadly missed by his grandchildren Stephanie, Katie and Christopher ( Aly) Moore, Tricia ( Chad) Ramsay McKie, and Karen( Nate) Lheureau Simpson, Dana, Thomas, and Adam Lheureau and by his great -grandchildren Connor and Nolan Moore, Layla and Lincoln Simpson and Owen McKie, many Ramsay, Dailer and Morgan nieces and nephews, and special friends Jan Campbell and Ray Benadetta of Shadyside , OH.
While we rejoice in the knowledge that Paul is reunited with Sally, Tommy and his family in heaven, his passing is heartbreaking for those of us who loved him and will miss him. Paul leaves behind a legacy of love and caring in the lives of all he touched. Paul was an avid lover of country music and to quote a line from one of his favorite country songs by Randy Travis, “It’s not what you take when you leave this world behind you, it’s what you leave behind you when you go.” Paul surely left an indelible mark on all who knew him.
A memorial service will be held at the Bauknecht-Altmeyer Funeral Home 3900 Central Ave. Shadyside, OH 43947 on Aug 27 with a reception to follow at the American Legion Hall in Shadyside. Burial will be at Belmont Memorial Cemetery in St Clairsville, OH following the reception. Memorial contributions can be made to The American Kidney Fund, The American Macular Degeneration Foundation or the American Cancer Society.

I’m so sorry for the passing of your father Paul. He was very good man. Love and prayers to your family.