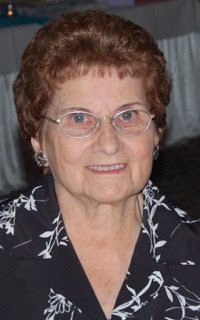 Pauline Homer Petronek, age 91 of Bellaire, Ohio, was called home to be with the Lord on Thursday, September 8, 2016, surrounded by her family at Liza’s Place.

She was born in Bellaire, Ohio on August 31, 1925, the daughter of Mary Matz and Michael Homer.

She worked for JC Penney while attending Bellaire High School, and after graduating she accepted a position with the A & P Tea Company, where she was employed for 37 years. After retirement she volunteered at the Soup Kitchen and various hospitals, and she also visited local nursing homes.

Pauline enjoyed a number of activities that included swimming, exercising and all forms of dancing, but she was especially partial to the oberek. She was an avid coupon user and was most adept at finding bargains. She enjoyed traveling and visited many countries such as Austria, Hungary, Germany, Italy and her favorite, Jerusalem. She also traveled extensively throughout the United States as well as embarking on four cruises. She thrived on helping others, and everywhere she went, she always had a joke to share.

Pauline also was dedicated to reading her Bible daily, and her favorite verse was 2 Timothy 4-7; “I have fought the good fight. I have finished the race. I have kept the faith!”

In addition to her parents, she was preceded in death by her husband, of 36 years, Sylvester Petronek, two brothers, Michael and Leo Homer and four sisters, Marian Homer Brewster, Anne Homer John, Helen Homer Marchese and Irene Homer.

She is survived by Louis Beltrondo of Shadyside, Ohio was her special friend and companion during her golden years. Also surviving are numerous nieces and nephews, all of whom she treated as her own children.

Family and friends will be received at the Bauknecht-Altmeyer Funeral homes & Crematory 441 37th Street Bellaire, Ohio on Monday from 2 to 4 and 6 to 8 pm and Tuesday from 8 am until 9:30 am Blessing service followed by funeral services   at 10:15 am at the Sts. Peter and Paul Orthodox Church in Moundsville with Fr. William J. Evansky officiating. Interment in the Greenwood Cemetery in Bellaire, Ohio.

Parastas services will be held on Monday at 3:30 pm.

In lieu of flowers, a memorial contribution can be made to the Saints Peter & Paul Orthodox Church, 1109 Morton Avenue, Moundsville, WV 26041 by going to “TMCFunding.com.”

Share your thoughts and memories with Pauline’s family at www.bauknechtaltmeyer.com.

Condolances to the Homer and Marchese families….an old neighbor.

To Pauline’s family my deepest sympathy and I will miss her. I worked with her as a teenager at the A&P, we went window shopping in W.Va., had tea and went dancing for several years before I moved to Calif. We still wrote each other and for over a year we have been talking on the phone and I will miss her but am glad she is in no more pain or suffering. I know God will be glad to have a great person like her. I loved her as a friend and we know each other for 58 years and she was an angel in my eyes. I know she is with God and Happy.

Rest with angels, my wonderful friend. I will miss our Sunday conversations where we solved the problems of the world. You will ALWAYS have a special place in my heart. I love you, Pauline. Memory Eternal.