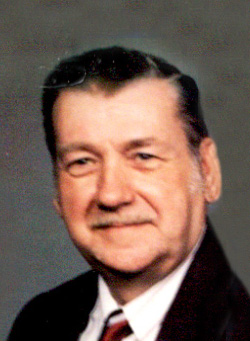 He was born in Bellaire, Ohio on July 27, 1931 son of the late Howard and Hallie Potter Weeks.

Ralph was a retired Bellaire Police Chief and a member of the South Bellaire United Methodist Church.

After retiring as police chief, Ralph devoted his time to farming his own land.

In addition to his parents, he was preceded in death by his wife, Martha J. Tiber Weeks on November 17, 2005; infant sister, Karen, sisters, Edna Fornia, Peg Ullom and Marian Weeks and brothers, Kenneth, Melvin and Charles Weeks and son-in-law, Russell Marling.

Family and friends will be received at the Bauknecht-Altmeyer Funeral Homes & Crematory 441 37th Street Bellaire, Ohio on Friday from 1 to 8 pm where services will be held on Saturday at 10 am with Pastor Jim Lish. Interment in the Holly Memorial Gardens in Pleasant Grove, Ohio.

Memorial contributions may be made to the South Bellaire United Methodist Church by going to TMCFunding.com.

Share your thoughts and memories with Ralph’s family at www.bauknechtaltmeyer.com

David and Rita,
Paul and I are truly sorry for your loss. All of our love,hugs and good vibes coming to you in this trying time. You all will be in our thoughts and prayers

Gene, Jim, David, and Family Members. Sorry to hear of your loss of a Dad, Grandpa and family Member. He was a good Police Officer for Bellaire and was an example to many. May the Lord comfort you all during your time of sorrow. Deeb and Jerry Swift

Scott sorry for your loss. Thoughts and prayers sent to you and your family

Scott sorry for your loss. Thoughts and prayers sent to you and you family

Our thoughts and prayers are with you Amy and Chad. He was such a nice man. We love you!

So sorry for your loss. Ralph was one of the good ones. Wishing peace and happy memories.

Scott, we’re so sorry for your loss. Our thoughts are with you and the family.

Our thoughts and prayers are with you, Jennifer and family. So sorry to hear of your dad’s passing.

So Sorry for your loss. Ralph is in heaven now.