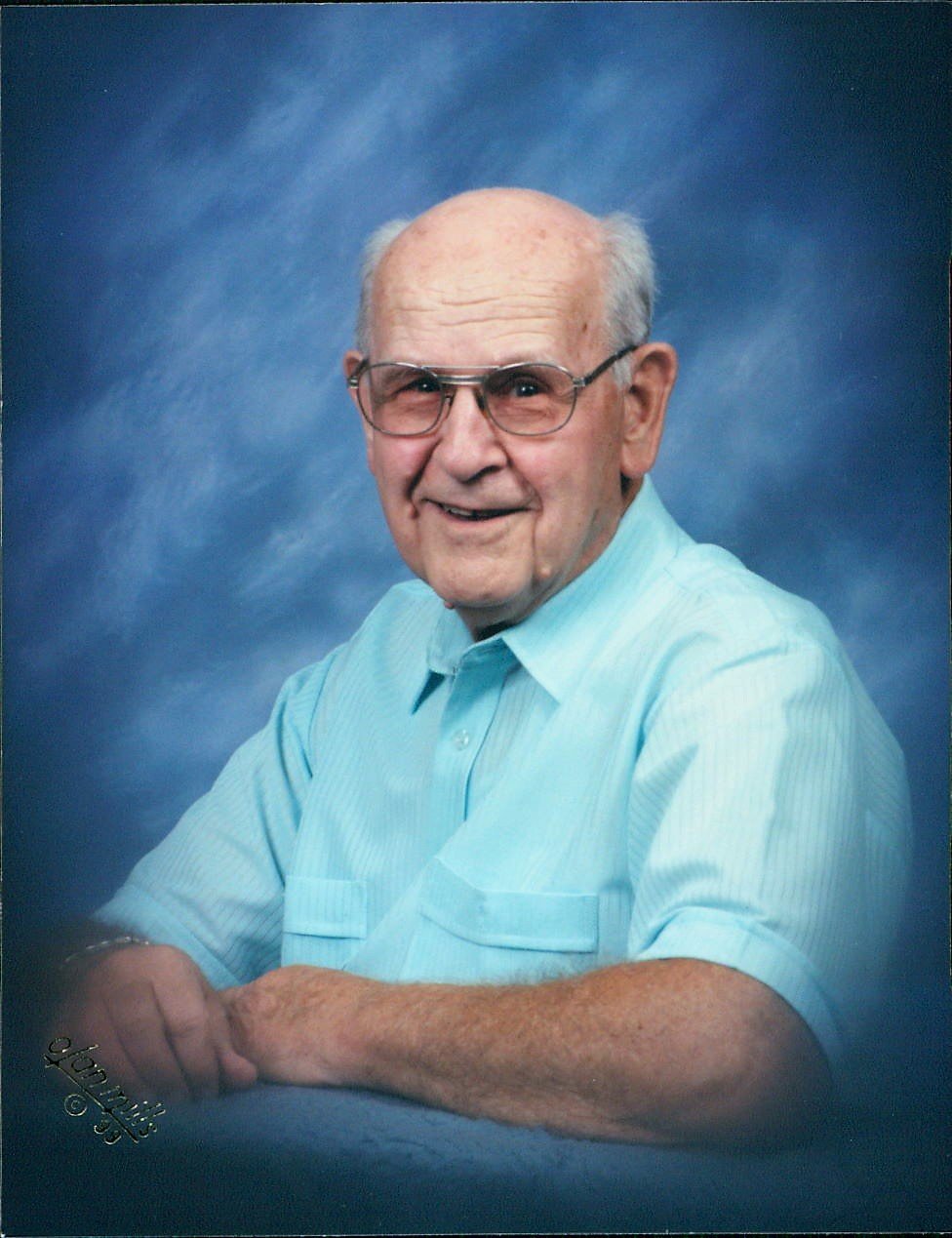 He was born July 20, 1921 in Fairpoint, OH a son of the late Glenn and Grace Giffen Ferguson.
Dick was retired from Ohio Bell and was a member of First United Methodist Church in Bridgeport, in recent years, attended Calvary Presbyterian Church in St. Clairsville.

He was a member of the Golden Bowlers Team, a volunteer for the American Red Cross, Ohio Bell Telephone Pioneers, St. Clairsville Lions Club, Buckeye Christian Group and proudly served our country in the U.S. Army Signal Corp during WWII.
Dick loved to travel. He would pack his van and head out for a journey. Over the years, he traveled to all 48 mainland states, Alaska and throughout Canada.
In addition to his parents, he was preceded in death by his wife, Lois R. Thomas Ferguson in 2004; a son, Richard Ferguson; two brothers, James and Robert Ferguson; three infant brothers, Donald, David and John Glenn Ferguson.

Surviving are a daughter, Rebecca S. “Becky” Kinney of Bridgeport and her companion Frank Papini; a sister, Eleanor Found of Buffalo, NY; a sister-in-law, Dorothy Gene Thomas of Wheeling, WV; a special friend, Nancy Davis and family of St. Clairsville; several nieces and nephews.
Friends will be received on Sunday from 1-5 pm at Beck-Altmeyer Funeral Home & Crematory 204 West Main Street St. Clairsville. Friends will be received on Monday from 10 am until time of funeral service at 11 am at Calvary Presbyterian Church, St. Clairsville with Rev. James Hoff and Rev. Terry Lucarelli officiating.

Burial will follow in Holly Memorial Gardens, Pleasant Grove, OH where full Military Honors will be conducted by the Belmont County Veterans Association.
His daughter Becky would like to thank the staff at Forest Hill Nursing Home and the staff at Medi Home Hospice for the compassionate and loving care they gave her father.
Memorial contributions may be made to St. Clairsville Food Pantry in care of First Presbyterian Church 110 South Marietta Street St. Clairsville, OH 43950 or by going to “TMCFunding.com”
Share your thoughts and memories of Dick with his family at www.beckaltmeyer.com

Uncle Dick was a staple of our family holiday dinner table. Every Thanksgiving and Christmas he would lead us all in prayer — it was always a favorite moment of mine. His clear love and zest for life will be truly missed — but it will now forever remain in my heart as a guide and example to live by.

So sorry for your loss. Dick was head of our bible study group and was a wonderful leader and a great person. He will be missed dearly.

Becky we are so sorry to hear of your Dads passing. You and I have had many conversations about our parents. May you find comfort knowing he is in a better place. God Bless

Mr. Ferguson was a wonderful gentleman who loved his family. I have fond memories of traveling with him and Becky to see my first Pittsburgh Pirate baseball game. He was ‘a regular’ with the Red Cross Bloodmobiles and graciously escorted donors to seats afterwards. He would always tell people to call him ‘Dick’, because Mr. Ferguson was his father. Sincere condolences to Becky and family.

Mr Ferguson’s family, I did not have the privilege of knowing you, however your parents were near and dear to me during growing up years in the United Presbyterian Church in St.Claursville. Richard’s Aunt, was a Saint in many folks’ minds. So Richard you are now in the midst of a wonderful family of Christians.

Dear Becky —
My heart is saddened to hear of your daddy’s passing; but, there is gladness in knowing that he is now with his Lord.
May God’s peace and blessings be yours during this most tender season; and, may He give you many lovely memories, so that you may always have roses in December.

May your memories of Richard K. Ferguson, give you peace, comfort and strength…

† Greater love hath no man than this, that a man lay down his life for his friends. John 15:13