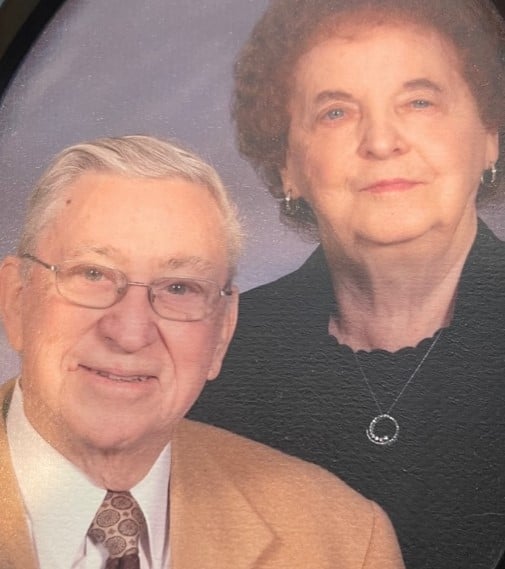 Robert Paul Ney of Bellaire, Ohio passed away peacefully Saturday, October 22, 2022 at Liza’s place surrounded by his loving children and son-in-law.
His wife of 76 years, Dorothy passed away in January of 2020. On Saturday she reached out her hand and said “Bob, come home with me.”

Bob was a humble man with great faith in God, super love for his entire family, and never uttered unkind thoughts toward people. He always looked for the positive and the best.
He was a worker starting at 12 as a paperboy, then a “soda jerk” at Isaly’s in Bellaire, the Capitol Theater in Bellaire as an usher, and his grandfather Henderson’s Studio of Photography.
He loved his family, his brother’s and sister. They always were close. He adored and respected his Mother.
Bob was a 1941 graduate of Bellaire High School, where he and his wife, Dorothy were high school sweethearts and cheerleaders together.

He served his country in World War II in his beloved Navy. When he went off to war, he and Dorothy were married in Chicago. After the war they settled in Bellaire and raised two children, They were amazing parents. Bob was blessed with many grandchildren, great grandkids and great great grandkids! He enjoyed and loved them all.
Bob worked 36 years and loved WTRF TV and all his co-workers. He also traveled with the Wheeling Ironman as a photographer.
He and Dorothy retired and enjoyed family, travel, their many friends, campaigns, and meeting a couple of Presidents!

His family and friends are blessed and fortunate to have had him for 99 years and 3 months.

“Those we love never truly leave us. There are things that death cannot touch.”

May his memory be for a blessing.

Family and friends will be received at the Bauknecht-Altmeyer Funeral Homes & Crematory 441 37th Street Bellaire, Ohio on Wednesday from 4 to 8 pm. Funeral liturgy with Mass will be celebrated on Thursday at 10 am at the St. John Catholic Church in Bellaire with Fr. Daniel Heusel as Celebrant.

Interment in the Holly Memorial Gardens in Pleasant Grove, Ohio.

Memorial contributions may be made to Liza’s Place, or the St. John Catholic Church by going to TMCFunding.com.

Bob and Family, Frank and I are so sorry to hear of the passing of your dad. He was always smiling and so friendly.
Please accept our deepest prayers and sympathy.

Memories with Mr. Ney. Sitting in Regas Restaurant with many others discussing the world events on the stools with many others all enjoying coffee. I was the youngster in the group. It was one of life’s most pleasant times to have known Bob and all the others who will be greeting him in paradise. May God bless the family.

Bob, so sorry for your loss.

Bob and all of your family. We send our sympathy. The pictures you shared were lovely and nice way to remember your dad

So very sorry to hear of the passing of Bob Sr. A lot of good memories of he and all of you. Such a good man. Such a nice man. Many hugs and prayers to all of you.

Bob,Your dad obviously developed a work ethic at a young age,a great example for you and your sister.My prayers are with you.

Emmy Lou & family. I send deepest condolances on the loss of your father. God has him in his care, but you have him in your hearts.﻿

It was my sincere pleasure to have known Bob for as long as i can remember and to have enjoyed his gentle and caring soul. Our deepest condolences go to the entire family.

Staci and family….I am so very sorry for the loss of your grandfather. Much love and many prayers, sweet friend.