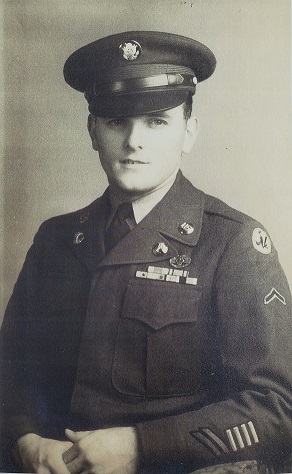 Robert Fahey, 93 of Bridgeport, Ohio died Thursday August 29, 2019 at his home surrounded by his loved ones.

He was born March 12, 1926 a son of the late George and Blanche (Schiffer) Fahey in Wheeling, WV.

Robert served in the Army during WWII and the Korean Conflict.

He worked as a teacher for Shadyside and Powhatan Point school districts and later became principal.

He is preceded in death by his parents, his sisters, Mary Ann McCormick, Blanche Fahey, Rhea Fahey, Angela Fahey, Sister Claire Joseph Fahey as well as an infant sister.

In addition, he is preceded by two brothers Dennis and George Fahey.

He is survived by his beloved wife Dorothy (Marchese) Fahey, a brother Jack Fahey of Wheeling, WV and sister Betty Fahey of Warwood, WV.

Robert also leaves behind thousands of students he influenced through his long teaching career and a grateful nation that he helped to protect spanning two wars.

Family and friends will be received at the Bauknecht-Altmeyer Funeral Homes & Crematory 441, 37th Street Bellaire, Ohio 43906 on Sunday September 1st from 3 until 8 pm.

Rosary service will be held at 4 pm.

The Belmont County Council of the American Legion will conduct military services at 7:30 pm and a Vigil service will be held at 7:45 pm.

Funeral liturgy with Mass will be held Monday September 2, 2019 at 10 am at St. John Catholic Church in Bellaire, Ohio with Fr. Daniel Heusel officiating.

Burial will follow at Mt. Calvary Cemetery in Bellaire, Ohio.

Bit late with this but I just saw on the obits & wanted to express my sorrow at Bob’s passing to Dorothy & the family. They were our neighbors way back when & I enjoyed babysitting the kids when needed b/c Bob & Dorothy were such sweet people! They were good neighbors & good friends to my mom & stepdad Jesse & Margaret Camelo. I would have made an effort to be at the funeral home had I seen this earlier. God bless you all~~even now I’m sure you grieve! Prayers are with you! Judi McGarry

Mr. Fahey, was the GRETEST teacher, person, and friend, I ever had, and anyone who knew or met him, was greatly rewarded just by knowing him. I shall never forget him or all he has done for me in school, and after. May God grant you the best place in Heaven. Rest in Peace.

So Sorry for your loss. I remember him well both as a teacher and principal.

Very sorry for your loss, Jackie and family. I salute his military service, also; Prayers for you all!

A wonderful English teacher to me for four years and a good friend.

Uncle Bob led a long and storied life, including his honored military service as well as his extended education career. Affectionately referred to as “the dumbest educated man he knew” by our father Don McCormick due to his lack of mechanical skills, he was able to teach our Mom (Molly) his sister, how to drive when she was in her 50’s! His pipe/cigar aroma was a familiar scent at most family functions growing up, along with his ever-present newsboy cap to cover his bare head. He had a quiet, unassuming nature, always with a kind word or inquisitive question about our family. He will be sorely missed.

My sincere and deepest condolences to the family and friends of Mr. Fahey. Denny Albaugh

Mr Fayhey was my Latin teacher I gave him such a hard time but he endured and I surprisingly learned in spite of myself. He was honest understanding and compassionate always giving good advice. He was a great teacher. I will always remember his talks. I had great respect for him. Prayers of comfort for his wife and family.

Mr. Fahey was always a very kind and patient teacher. Thank you for your service to our country and for our freedom. Prayers for comfort for the family.

May your memories of Robert F. Fahey, give you peace, comfort and strength…