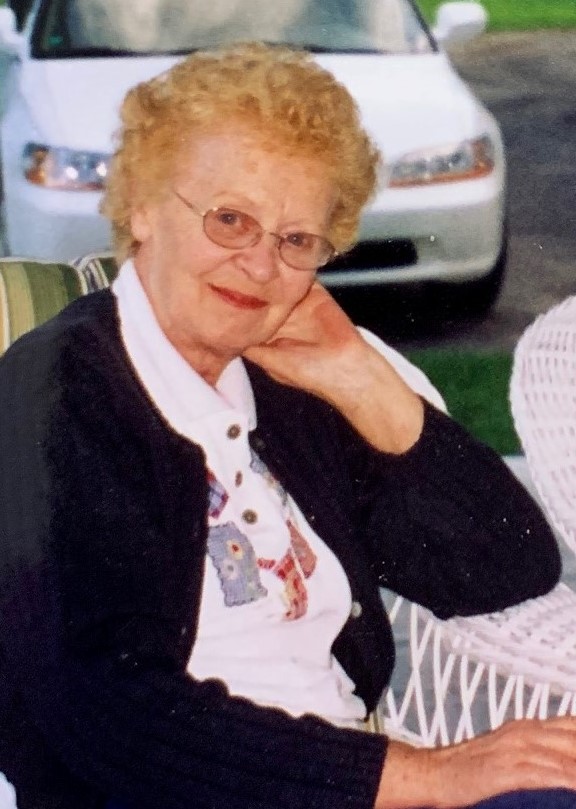 Sara “Sally” Morgan Ramsay, 90 of Crown Point, Indiana passed away on Friday, May 15th at the St Anthony’s Hospital in Crown Point, Indiana following a slow decline and a brief battle with Covid 19. She was born on Wheeling Island, WV on August 6, 1929 to Katherine and Sam Morgan.

Sally was born and raised an “island girl”, graduating from Wheeling High School and starting a secretarial career. She was introduced on a blind date to Paul Ramsay, who upon seeing her for the first time, proclaimed “I’m going to marry that girl” and so he did. Following a tour of active duty in the Air Force, Sally and Paul settled in Shadyside, Ohio where they raised their family and lived the majority of their married life until August of 2018, moving to St. Anthony’s Assisted Living in Crown Point to be closer to oldest son Jeff. The offer was made to move to Maine where oldest daughter, Barb, lived but Sally was chilly on a hot July afternoon in Shadyside and the frozen tundra of a Maine winter would not have been to her liking.

Sally was never happier than when surrounded by family and friends. Bridge club, card parties, playing dominoes, family picnics at Oglebay and Wheeling Park, and family get togethers were favorite activities. She loved watching golf on Sunday afternoons, Pittsburgh Pirates and Steelers games whenever they were televised, “Murder She Wrote” and “Cheers” reruns and in later years, The Game Show Network playing shows she loved from the 60s and 70s. She had a wicked sweet tooth and anything chocolate was her treat of choice.

To know Sally was to love Sally. She was the epitome of grace, kindness and understanding. She had the ability to make everyone she met feel important and seen and understood. She was a nimble mind from a lifelong love of reading and she could whoop your fannie with her bridge and domino playing skills.

Jimmy of Dover-Foxcroft, ME and daughter, Becky and husband, Ed Lheureau of Brownsburg, IN. Gramma Sally was much loved and precious to all her grandchildren, Stephanie, Katie and Chris (Aly) Moore, Tricia (Chad) Ramsay McKie, and Karen (Nate) Lheureau Simpson, Dana, Thomas and Adam Lheureau and great grandchildren, Connor and Nolan Moore, Layla and Lincoln Simpson and soon to be baby boy, McKie due this July, many Ramsay, Dailer and Morgan nieces and nephews, and special friends, Jan Campbell and Ray Benedetta of Shadyside, Ohio.

While her passing is heartbreaking, she leaves behind a legacy of love and caring in the lives of all she touched. And we rejoice in the knowledge that she is reunited with her family in heaven, especially, Tommy, whose death at such a young age, forged in her a profound gift of caring, kindness and love.

A memorial service and burial will be scheduled in Ohio sometime later this year.

Memorial contributions may be made to the American Kidney Association by going to TMCFunding.com or the charity of your choice.

Becky so sorry to hear this..Many many great times at your house…she was such a very sweet lady..get me on fb

I am so sorry for your loss. Mrs. Ramsay was such a loving person. May God comfort you at this time of sorrow.

I knew Sally and Paul through my sister Blanche Scott Riddle Goetze. Sally was a great woman and she will missed by so many. Blanche passed away 5-1/2 years ago.