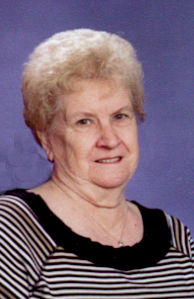 She was born April 29, 1935 in Powhatan Point, Ohio the daughter of the late Paul Pete and Edith Townson Bier.

Shirley was a retired school bus driver for the Switzerland of Ohio School District, a Presbyterian by faith and a member of the Powhatan Fire Department’s Womems Auxiliary.

In addition to her parents, she was preceded in death by her husband, Arthur Leland “Dick” Kenney on April 7, 2007 and one brother, Jim Bier.

Family and friends will be received at the Bauknecht-Altmeyer Funeral Homes & Crematory 186 Main Street Powhatan Point, Ohio on Thursday from 2 to 4 and 6 to 8 pm where services will be held on Friday at 11 am with Pastor Dale Ingold officiating. Interment in the Powhatan Cemetery in Powhatan Point, Ohio.

Share your thoughts and memories with Shirley’s family at www.bauknechtaltmeyer.com

Kathy and family,
I am so sorry for your loss. I remember your Mom driving us to our after school and band activities and being so kind and thoughtful to get us where we needed to be safe and sound, and never complaining. She was a sweet lady and I am sure will be missed by many. I hope your good memories of her will comfort you at this time of sorrow. Many blessings to you! Marcia

Candy, Darren and the entire Kenney family, I am deeply sorry for your loss…Shirley has touched so many ….I will always remember her as my neighbor, my bus driver, and a very devoted wife and mother….and a sweet lady….

Sincerest sympathies to the family. Your Mom and your Dad were always so very kind to us when we lived in Powhatan so many years ago. Cherrel, Darryl, and the kids

sorry to hear of the passing of your Mother.

to the family of Shirley Kenny,so sorry for the loss of your Mother, always liked her and she was a nice lady always liked talking with her. You all have our deepest sympathy.