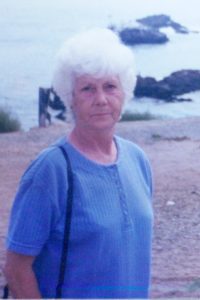 She was born January 23, 1931 a daughter of the late Jess and Elizabeth (Duvall) Cordery in Powhatan Point, Ohio.

Shirley was a homemaker and a Protestant by faith.

Her family was her life and she enjoyed spending time with her grandchildren.

Shirley was preceded in death by her parents, her husband Joseph Robson, sons, Perry and Jeffrey Robson and an infant daughter.

Her brothers Robert, Donald, and Glenn Cordery as well as a sister Sharon Vargo Williams and a grandson Harold Eugene Robson also preceded her.

In addition she is survived by a brother Blaine (Mary) Cordery of Powhatan Point, Ohio, eight grandchildren, and five great-grandchildren.

Family and friends will be received at the Bauknecht-Altmeyer Funeral Homes – 186 Main St. Powhatan Point, Ohio on Thursday February 13, 2020 from 2 pm until time of service at 5 pm with Pastor Don Cordery officiating.

Burial will be in Powhatan Cemetery at a later date.

Share your thoughts and memories of Shirley with the family at wwwbauknechtaltmeyer.com

Sending my love to Joey ,Mary ,Reggie,Tish, Jolynn, Dylan and Sonja ‘s her family . Aunt Shirley will be truly missed She was one of my favorite aunts. I know she is back with Uncle Jo happy again at last. Love you all

My mom Doris Flor and your mom spent so much time together. They loved to set on the swing at both of their houses while they would visit. They would share so many stories. They would both make me laugh. I loved Shirley. I am so sorry for your loss and will be praying for the family. Love to all.

Sending prayers to all the family. I’m sorry for your loss ❤

What a lovely lady she was. Prayers for you all. My truest deepest sympathies.

She was one of my favorite aunts. I will miss her deeply. Love you Aunt Shirley. Say hi to my mom and my dad