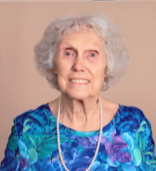 She was born November 29, 1918 in Powhatan Point, Ohio a daughter of the late Crawford and Anna (Crooks) Kocher.

In addition to her parents, she was preceded in death by her husband, George Neff Fielding and son, Marvin Gary Fielding.

Family and friends will be received at the Bauknecht-Altmeyer Funeral Home & Crematory 186 Main Street, Powhatan Point, Ohio 43942 on Wednesday, September 28, 2022 from 11:00 am until time of service at 1:00 pm with Pastor Johnnie Chavers II officiating. Interment will follow at Powhatan Cemetery.