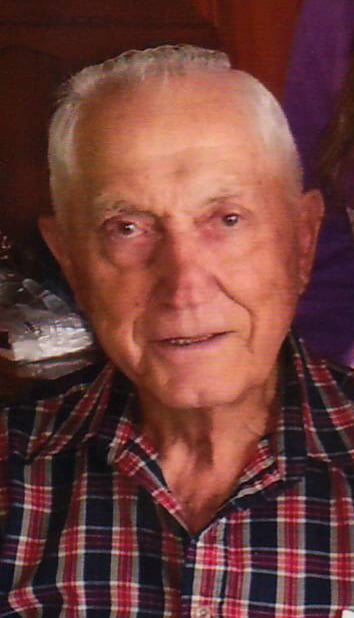 Steve Juriga, 91, of Flushing, Ohio died Thursday, September 10, 2015 at Astoria Place of Barnesville.  He was born July 21, 1924 in Flushing a son of the late John and Mary Bobos Juriga.

Steve was a retired coal miner at Consol Coal Company’s Franklin Mine, a member of the former St. Paul’s Catholic Church, D.A.V. of Bellaire, Ohio and proudly served in the US Army in France during WWII earning the Purple Heart Medal.

In addition to his parents, he was preceded in death by his wife, June Clark Juriga; five brothers, Joseph, John, Steve (infant), Emil and William Juriga; a step-son, William Dale Moore.

Share your thoughts and memories of Steve with his family at www.beckaltmeyer.com

May your memories of Steve Juriga, give you peace, comfort and strength…

Every time we came to visit you treated us well. You always had a smiling face and were happy to see us. Aunt June was the same, always cooked us a good meal and we always felt welcome. Uncle Steve, you shall be missed. May God Bless Your Niece, Theresa Juriga

When we came from Akron for a visit, we always had a very good time, especially being at Grandpap’s house on the farm. You, my Dad and all the uncles were there, having a cookout and playing horseshoes and laughing constantly. It was always a pleasure to come to your house. You made everyone feel welcome. Even though we are grown now, you always remained the same Uncle Steve. You surely will be missed by all. We love and shall miss you, Uncle Steve. May God Bless and Take Care Of You. Always love you, Your Niece, Theresa Juriga

When we came for a visit, you were always happy and kept us laughing.

Vacationing at the Juriga farm when I was a Kid.

Taking me in when my father ousted me. Staying with you and Aunt June. Going to lunch at your favorite restaurant on the PIKE.

Going to lunch at your favorite restaurant on the PIKE.

You and Aunt June were always there for me, after my Mom passed away.

Stopping at your house with treats from the Dairy Queen. Just talking about life and times.

My loving uncle Steve, with his loving wife, aunt June, who stepped in when my father disowned me. I am going to miss you greatly.