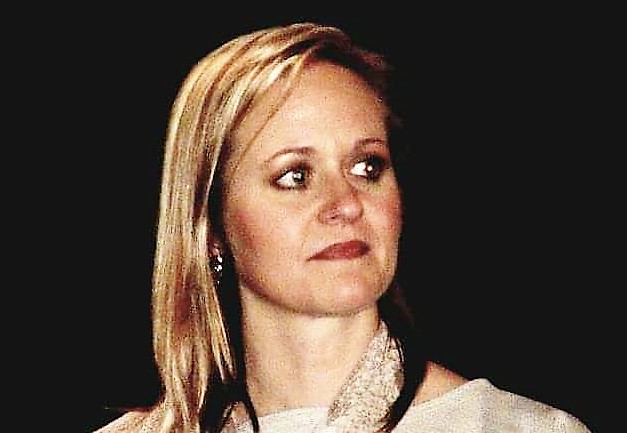 She was born July 5, 1967 a daughter of Nancy (Stanek) Wisvari and the late Charles Wisvari in Columbus, Ohio.

Susan was very active in her church serving in numerous capacities over the years.

She was a Master Gardener and loved to plant.

Susan was the Director of Recreation at Peterson Rehabilitation Hospital and was responsible for establishing the volunteer program as well as a C.T.R.S.

She was also very active with The Linsly School sports program her children competed in. She was married to James Weir on May 25, 2002.

She is survived by her husband, her mother, mother-in-law, MaryAnn Weir and her children, Taylor Wisvari-Weir and Jack Weir. In addition she is survived by her brothers Joseph (Teresa) Wisvari and Thomas (Susi) Wisvari; a sister-in-law, Jacqueline (Paul) Cacciatore, two aunts, Delores Griffith and Paula (Richard) Wiater and a cousin, Ann (Victor) Lopez.

She is also survived by her nieces, Jenny Wiater, Alexandria Cacciatore, Chrissi and Ashley Wisvari and her nephews Sam and Trevor Wisvari.

Family and friends will be received at the Beck-Altmeyer Funeral Homes & Crematory, 204 W. Main St. St. Clairsville, Ohio 43950 on Friday August 18, 2017 from 1 to 8 pm and from 11am until time of service at noon on Saturday August 19, 2017 at the Martins Ferry First Christian Church with Pastor Rod Kasler officiating.

Memorial contributions can be made to the Martins Ferry First Christian Church.

Share your thoughts and memories of Susan with the family at www.beckaltmeyer.com

I only just learned of Susan’s passing and still want to include my memories of some special times with her. Susan asked me to play the piano for the first Christmas Tea (almost 9 years ago now) that she organized at Peterson, which turned out to be the very day my mother died there earlier in the day. Being able to play anyway was a blessing to me and created a bond that remained with Susan, who asked me to play every year since. When my father died at Peterson this past September she shared her pain at also having just lost her father, and it was so meaningful to be able to share the experience with someone who understood. I had many opportunities to see her at work in the Activities Department, witnessing her creative spirit of encouraging patients, family members, and other staff with enthusiasm and much love, even when sometimes struggling with her own pain. She has left a heritage, I believe, that remains there. And I know that she has left a rich example of care and compassion for me personally.

Our thoughts and prayers are with you at this difficult time.

Jim, I’m very sorry for your loss, and have you and your family in my prayers. May you find peace and comfort from friends and family at this difficult time.

Was such a beautiful person, touched so many lives. I know that Susan is in heaven as a special ANGEL. Will always miss and love this special lady.

Susan was rare gem who shone brightest when talking about her family especially her children, that’s how we met – our daughters were friends! She had that infectious laugh you never forget, a smile that held warmth. A beautiful girl inside and out. We are all better for knowing her, she brought with her a true compassion for everyone. My heart hurts for all her family especially Jimmy, Taylor and Jack. This is hard to believe and I will never forget all the memories we shared together. Sending deepest sympathy to all.

We are so sorry to hear of Susan passing, she was a wonderful women. Prayers to her family, God bless you all, you all are in our thoughts and prayers. Sincerely The Dolfi’s

Jim, Taylor and Jack, so so sorry to the passing of your wife and mom Susan. What a beautiful strong lady inside and out she was. Heaven sure gain a true angel, and she will always be looking over you all and guiding you. Thoughts and prayer r with you at his difficult time.

Jim, Taylor and Jack, so sorry to hear the passing of your wife and mom Susan. What a true beautiful lady inside and out she was. Heaven sure gained a special angel. Thoughts and prayers for you all.
Tammy, Michael, Austin and Shaye
DeLeonardis

I had the privilege of meeting Susan at Peterson. She was a special person always had a,smile on her face regardless what was going on in her private life. Her string faith, family and friends helped her through her Times of need. Prayers to family and friends. She may not be here on earth but she is soaring with the angels rest in peace