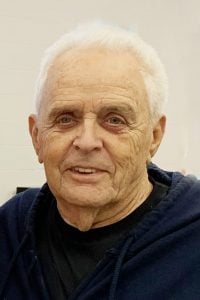 He was born in April 22, 1937 in Bellaire, Ohio son of the late Louis H. and Hazel Decker Pacifico.

Tom was a retired coal miner with Consol Energy’s Ireland Mine and a Catholic by faith.

In addition to his parents, he was preceded in death by his wife, Patricia L. Bolon Pacifico on April 12, 2017 whom he married on April 7, 1956, daughter and son-in-law, Cindy and Roger Dornon, three grandsons, Matthew and Christopher Exner and Zack Dillon, a great granddaughter, Charli Dornon, sister, Frances Schramm and brother, Richard Pacifico.

Family and friends will be received at the Bauknecht-Altmeyer Funeral Homes & Crematory 441 37th Street Bellaire, Ohio on Tuesday from 12 Noon to 7 pm where services will be held on Wednesday at 10 am with Fr. Daniel Heusel officiating. Interment in the Mt. Zion Cemetery in Bellaire, Ohio.

Memorial contributions may be made to the Belmont County Salvation Army by going to TMCFunding.com.

Share your thoughts and memories with Tom’s family at www.bauknechtaltmeyer.com

So sorry Louie for you and your family’s loss, sending prayers and wishing you all the best.

Kim and Robin, I am so so sorry for your loss, sending prayers to you and your families,

Dear Robin, I was so sorry to read about your fathers passing. My prayers go up for him and your entire family.

John Mike, Alison and family, so sorry to hear of your loss. May God give you peace.

I will always love him with my heart in every time and every galaxy of the 7 levels of charaka. I love him for life evan know he kicks me hard in the leg and chest when I fight with you. I will still love him for life for until I die an go to heaven he is always with me in my heart an I will always remember he was a funny person.By Jackson Dillon.