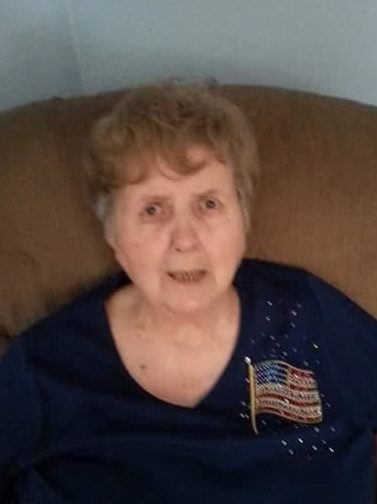 Valerie M. Baker, “Nan” 83, of Powhatan Point, OH died Thursday, May 31, 2018 at UPMC Presbyterian Hospital, Pittsburgh, PA. She was born March 11, 1935 in London, England a daughter of the late Stanley and Dorothy Jones.

Valerie was a homemaker and a Protestant by faith.

Friends will be received on Monday from 2 until time of service at 6 pm at Bauknecht-Altmeyer Funeral Homes & Crematory 186 Main Street Powhatan Point, OH 43942 with Pastor William Coker, Jr. officiating. Burial in Powhatan Cemetery at the convenience of the family.

Share your thoughts and memories of Valerie with her family at www.bauknechtaltmeyer.com

Nan, we love and miss you. You are no longer in pain. Yesterday was one of the hardest days for me, kelsey and Ayden (little red). Your at peace and running through the clouds also chasing toby. You was the one that i went to with questions and you also told me.to listen to my heart. I am sorry for not being there on your last day with us,but i know you know why i wasnt there. Your will forver be the angel that watches over me , kelsey, an Ayden.as well the rest of the family too.
Of all the special gifts in life, however great or small. To have you as our Nan was the greatest gift of all. May the winds of love blow softly and whisper in your ear . We love and miss you Nan, and wish that you was here. Deep in our hearts your life is kept.To love and cherish not forget. No more tomorrow’s we can share.but the yesterday’s are always here.
A SILENT THOUGHT
A SECRET TEAR
KEEPS YOUR MEMORY EVER NEAR
IN OUR HEARTS FOREVER
JASON, KEN, JAMIE . KELSEY JO, AYDEN,KEVIN, LACEY, KEVIN, HALEY, RYAN and ALISSA.

mom wish we had more time together.but at the same time i am glad that you are pain free. you will never be forgotten and will live in our Hearts forever. love and miss you

Jason please know I am thinking of you and your family. I am happy for all rhe wonderful years you had with your Nan and wish I could be there wirh you. Hope you have a beautiful celebration of her life. Cat

Nan what can I say to you that I havent already done so in the last 41 yrs of my life to let you know what you mean to me. You are my rock, my problem solver and most importantly my best friend. You gave me so many wonderful memories and taught me so much about life and family love that helped make me the person I am today. Although seeing you tomorrow and saying goodbye for now will be the hardest thing I’ve done I will see you in time again and I take comfort in that. Just know that part of you will be in all of us for generations to come. You created a family built on love and trust. I love you with all my heart Nan.

Prayers for the family

To a very special sister who was always loving and will always be close. You will always remain in my heart.

Valerie was a special lady and a wonderful sister to my Nan.

When I was a child my Nan took my Brother and I to America to stay with Valerie and the family. It is one of my best memories and I will chose to remember Valerie as I did then; a warm, kind and loving lady who was loved by many.

I trust you are in a perfect place and watching down on all of the family. You will be missed.

I know what it is like to lose your mom, not only was she always there for you and loved you with all of her heart, she was your best friend. Aunt Valerie will always be in our hearts. With deepest sympathy, Polly and Art East