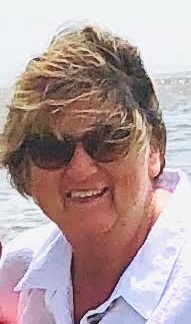 She was born January 1, 1960 in Bellaire, Ohio a daughter of the late Anthony S. Skrabak, Sr and Julia C. (Dobbins) Skrabak.

Virginia was employed at the Huntington Bank in Shadyside and a former employee of Riesbeck’s and Wesbanco Arena. She was a Catholic and attended St. John Catholic Church.

Doll’s happy place was The Beach and she was an avid fan of The Ohio State Buckeyes.

The family appreciates the exceptional and comforting care she was provided at the Continuing Healthcare of Shadyside.

At Virginia’s request, there will be no visitation.

Family and friends are invited to attend memorial visitation at the St. John Catholic Church on Saturday, December 18, 2021 from 12 Noon until time of Memorial Funeral Mass at 1 pm with Fr. Daniel Heusel, as Celebrant.

Memorial contributions may be made to The Breast Care Center of Wheeling Hospital by going to TMCFunding.com.

Just heard. So very sorry. Doll was such a beautiful person.

So sorry to hear of Virginia’s passing. I didn’t see her often but when I did we would always have long talks. She was such a sweet girl!!

I’m so sorry Shannon for the passing of your mom. I’m keeping you, Addison, and your family in my prayers.

My sincere condolences to the entire Skrabak family.

Such a good soul, whenever I saw her she always had a smile. R I P Virginia May the many memories comfort her family and friends.

Sue and family, so sorry for the loss of your sister. My thoughts and prayers are with you and your family. May she Rest In Peace.

Virginia will be deeply missed. She had a caring heart and great sense of humor. Loved seeing her smile at work and all the great times we had, always made the best of our days. My thoughts and prayers are with you at this time. She is no longer in pain and lived every second of her life with a smile, that’s what I will remember. ♥

Dear Shannon, Derek and Tonilia,
My condolences on the passing of your Mom. What a sweet, fun person. I was friends with Virginia since 7th grade. She was always so funny. I remember her ETAs the most when we were meeting after work. She was at Kaufman’s and me at Goods at the mall. Then raising you kids and dance Moms. I know she loved swimming and the beach. We were at the old Bellaire Pool every day. I’m still in shock. May she Rest In Peace. Love and hugs.
Corina

R.I.P. sweet girl! I will always remember the GREAT times we had in high school and the dances when the nuns got us at the St Johns dance!! Fly high with the Angels and rest easy.

I will always remember Virginia’s beautiful smile. We shared many good times in high schools and lots of laughs. I have such good memories of our times together. Thank you for your friendship Virginia. The world is a sadder place without you.