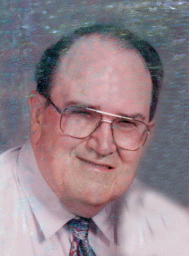 He was born August 15, 1925 in Bellaire, Ohio the son of the late William W. and Selma Kinnemond Starrett.

Bill was a retired employee of the former Picoma Industry, a member of the Trinity Episcopal Church in Bellaire, Ohio, a 65 year member of the Shadyside Lodge 724 F & AM, Past Monarch of the Medina Grotto, an honorary member of the National Imperial Glass Association and a founding member of the Bellaire Emergency Squad. Bill was a proud member of the Pride of the Valley Barbershop Chorus.

In addition to his parents, he was preceded by his wife of 65 years, Alice Steger Starrett on December 22, 2012.

Family and friends will be received at the Bauknecht-Altmeyer Funeral Homes & Crematory 441 37th Street Bellaire, Ohio on Wednesday from 4 to 7 pm where services will be held on Thursday at 11 am with Rev. John Brandenburg officiating. Interment will follow in the Greenwood Cemetery in Bellaire, Ohio.

Shadyside Lodge 724 will conduct masonic services on Wednesday at 7 pm.

Belmont County Council of the American Legion will confer Military Honors on Thursday at 10:45 am.

Memorial contributions may be made by do the Ohio Valley SPCA by going to “TMCFunding.com”.

The National Imperial Glass Collectors Society sincerely appreciates the work that both Bill and Alice did for the Society. Both shared a real love for the Society and contributed greatly to both Museum and Board activities. How fortunate we were to share their efforts. Their family can be proud of their contributions!

Debbie and Family, Sorry to hear about your Dad. My parents bought insurance from him in the early 1960’s. In those days, the insurance men visited their policy holders at their homes. He was so proud of you and loved you very much. Everytime he came by, he always talked about you Debbie. I also remember him doing different things around town as he was a civic minded person and loved Bellaire. Yours, Jerry Swift, BHS class of 1971.

When we were ready to open the Nat. Imperial Glass Museum in Bellaire, Bill & Alice were our first Docents. Bill recruited others for us from the
retired senior group. He loved to give visitors tours and he was super good. They had great stories to relate to everyone. We all enjoyed having them volunteer. Bill was a very special person. He never met a stranger. At last he is with his beloved Alice. Till we meet again old friend. Joan & Joe Cimini

May your memories of William Starrett, give you peace, comfort and strength…