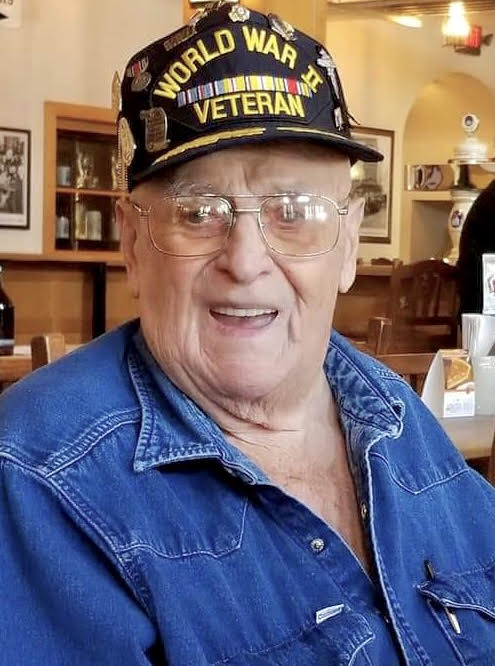 He was born November 22, 1921 in Bellaire, OH a son of the late Louis and Rhetta Davis Schluter.

William was a life long resident of Bellaire, OH. He was a World War II Army Veteran who received numerous medals during his time in the service. William was a member of the Bellaire VFW post 626, American Legion post 521, Bellaire Eagles and the Sons of Italy. He retired from Ormet after working 35 years as a “pot man”.

In addition to his parents, he was preceded in death by his wife, Leia Freda Shaw Schluter.

Share your thoughts and memories of William at www.bauknechtaltmeyer.com.

Dear Eileen I am so very sad to hear of your father‘s passing. My heart goes out to you and all your family. He was such a great man always willing to help others always willing to pitch in and help when things needed done. I am so glad to have got to know him. This will leave a huge hole in your heart I’m sure but remember he’s in a better place. He will always be smiling down on all of you. You were so very lucky to have him as your father and your children as their grandfather. So very blessed to of had him all these many years. All my love to each and everyone of you and Dan’s too.

So many memories of “Big Bill” at ORMET! He will be greatly missed. Prayers and condolences for the family

Deepest sympathy and prayers to Eileen and sons. Love, Lynn and Judy Steele

You are all in our prayers. May he rest in peace

I am so sorry to hear about your dad’s passing. It was a joy to have seen him last year.
So many memories of our parents working with Band Parents from so many decades ago.
My sister Jeanne & I send our thoughts & prayers to you, Lou & the entire family.
GOD BLESS!!

Eileen, I am sorry to hear about your father. I remember him as a very nice person. I pray that you find peace and comfort in your memories.

Eileen, I am so sorry to hear about your father. I remember that he was a really nice person. I hope your memories bring you peace and comfort during this time.

Eileen and Family, so very sorry for the loss of your Dad and Pap. He always had a smile and a good word for everyone.

May your memories of William H. Schluter, give you peace, comfort and strength…

Sorry for your loss Eileen Bill and Jt thank you so much for sharing him. And for loving our Jess. Rest In Peace dear man