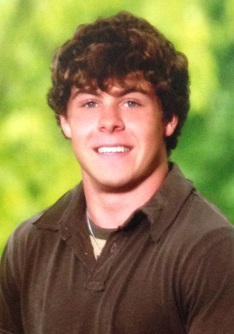 He was born April 11, 1990 in Wheeling, West Virginia a son of Michael F. and Kimberly A. Parr Materkoski.

Zach was currently a student at the Belmont Technical College in St. Clairsville, Ohio. He was a graduate of Bellaire High School, Class of 2008, where he was a Captain of the football team and had attended West Virginia University and was a former mine boss at the Murray American Energy’s McElroy Mine, Cameron Portal.

Zach was full of life. He was always ready to lend a helping hand and give a warm smile that brightened his entire face. He loved riding motorcycles, watching his brother play baseball and delivering his special homemade Christmas cookies to all his relatives. He loved watching movies, playing video games and playing football. He had a child-like wonder and an easy acceptance of all people. Those who loved him will miss his sparkling blue eyes and quiet calmness. Though his years were few, the positive ways he touched those who knew him were many.

He was preceded in death by his paternal grandparents, Robert and June Materkoski and maternal great grandfathers, Rev. James Parr and Harry Williamson.

Family and friends will be received at the Bauknecht-Altmeyer Funeral Homes & Crematory 441 37th Street Bellaire, Ohio on Sunday from 2 to 8 pm. Funeral liturgy with Mass will be celebrated on Monday at 11 am at the St. John Catholic Church in Bellaire, Ohio with Fr. Daniel Heusel, as Celebrant. Interment in the Mt. Calvary Cemetery in Bellaire, Ohio.

Vigil services will be held on Sunday at 7:45 pm in the funeral home.

Memorial contributions may be made to the Soup Kitchens of Wheeling or Bellaire.

Share your thoughts and memories with Zachary’s family at www.bauknechtaltmeyer.com.

You all are in our thoughts and prayers.

Our thoughts and prayers are with you! May God give you strength and help find peace at this most difficult time. The Shepherd family

Our thoughts and prayers are with the Materkoski family. Ionic Lodge 438

KIM AND MIKE: KEITH AND I’S THOUGHTS AND PRAYERS ARE WITH YOU!

Words can not express the sorrow and heartache you are experiencing right now I will always have fond memories of Zach coming down and hanging out with the other kids and was a great kid to be around. Our payers are with all of you during this time.
Karen & Roger Connors

I’m praying for family and close friends. I’m truly sorry for your loss.

Just remember, you have not said goodbye…only sent Zachary off….prayers are with you….

Katy, so so sorry for your loss. I continue to pray for you many times a day. May God hold u in the comforts of his hands. Sue Lewicki

Mike, so sorry for your loss. Cherish your memories and I pray for comfort for you and your family.

Mike and Kim: My prayers and thoughts go out to you and your entire family for your great loss of your son. May God give you all strength.